The Rotaract Club of Jagannath International Management School, Vasant Kunj was established in Dec,2010. The Club is sponsored by the Rotary Club of Delhi Imperial, Delhi (District RI 3010).

The objective of our Club is to provide our young College students with opportunities to foster leadership and responsible citizenship, and to promote international peace and understanding.

Rotaract stands for Rotary in action.

The details of the projects undertaken by the Club since its inception are given below:

India is home to 19% of the world’s children. About one-third of its population (around 48 crore, according to the 2001 census) is below the age of 18, and around 74% of this population lives in rural areas. The population in the age-group 0-25 years is 56 crore, which in turn is 54% of the country’s total population. Indeed, India has the world’s largest number of youngsters.
Around 1,618 languages, 544 dialects and 1,942 mother languages are spoken in India; schools impart education in 148 different mediums. Some 27,000 small and big newspapers and magazines are published in the country. All of this poses a huge challenge to India to produce educated and empowered young citizens.
India also has one-third of the world’s illiterate population -- a worrisome trend. It’s not as though literacy levels have not increased. If we look at the 2011 figures, 74.04% of people above the age of seven are literate. The male literacy level has reached 82.12%, while female literacy has touched 64.46% (the difference between male and female literacy level is 16%).

Out-of-school children
There are around 18.78 crore children in schools in our country today. But there are also hundreds of thousands of out-of-school kids involved in child labour or domestic work. In fact, out of the children enrolled in schools, 46% drop out before they complete their primary education. Most of them are girls.
At least 26 crore children in the country today are of school-going age. Going by the government statistics, 18 crore children are in schools. What about the remaining 8 crore?
Right to Free and Compulsory Education Act
The Right of Children to Free and Compulsory Education Act or Right to Education Act (RTE), is the legislation enacted by the Parliament of India on 4 August 2009, which describes the modalities of the importance of free and compulsory education for children between 6 and 14 in India under Article 21a of the Indian Constitution. India became one of 135 countries to make education a fundamental right of every child when the act came into force on 1 April 2010.
The Act promises free and compulsory education to any child in the age-group 6-14. The Act says that schools should be within a radius of 1-3 km from where the child lives. All government-aided schools have to reserve 25% of their seats for students from economically weak sections (EWS). Private schools that are not government-aided also have to reserve 25% of their seats in Class 1 for EWS students; the government will compensate them

The first program was held in June 2010.

It is expected that after learning sewing and tailoring, these women would become self sufficient and would be able to supplement their family income by stitching clothes in their respective neighborhoods.

Towards this women who successfully passed the sewing and tailoring course are given free Usha foot sewing machines and sewing kits through our sponsoring club, Rotary Club of Delhi Imperial.

The students took part in the Swachh Bharat Summer internship programme during June and August,2018.

A Cleanliness project under this programme pertaining to cleanliness of the slum  areas opposite the Vasant Square Mall ,Vasant Kunj,New Delhi was organized as under:

2.      The 15 member student team was led by Ms.Muskan Sharma with Harshit Seth and Aman Tayal as Coordinators.

3.      The students interacted with the local inhabitants of the slum areas and counseled them on the benefits of Swachhta and Personal Hygiene.

4.      Large parts of the slum area was cleaned by the student team.

The Swachhta programme was then extended by way of the “Hand wash awareness programme” The students  visited  the slum areas and made people aware about the benefits of washing their hands with soap before and after eating food, before touching babies, after seeing a sick person, etc.

The students distributed soap strips and talked to different people and  explained to  them  the benefits of using soap. It was a door-to-door campaign. The students  also explained to them that washing hands with soap and not just water is vital for proper hygiene. The campaign was overall a success as people were keen to know the benefits of washing their hands with soap, and understood that they should wash their hands before and after eating, before touching their babies, etc.

The Rotaract club of JIMS VASANT KUNJ had organised a program called "Swachhta Hi Sewa" on 18th October 2019 in the College Campus under Swachh Bharat Campaign initiated by the Government of India. The students joined their hands together for this good cause. Our esteemed Director, Dr. Ravi K Dhar  and Faculty Advisor,Prof.B.Manchanda inagurated the event. They administered the Swachhta Pledge of cleaning our surroundings for 100 hours per year ie 2 hours every week. The students made groups with 3 Coordinators in every Group. They took the broom, pan and the dustbin and collected and cleared all the waste and garbage near the College and their surroundings and market areas.

The Rotaract Club of JIMS Vasant Kunj organized  the  Donation Drive in August,18 for providing relief to our Kerala brethren . Following items were donated by the students and Faculty members:

Relief items were securely packed and handed over to Uday Foundation for onward dispatch to Kerala.

The Rotaract Club of JIMS Vasant Kunj has adopted  Ms.Vimlesh Kumari for her education with respect to  the One Year Diploma Course at the NSIC Centre in Okhla ,New Delhi.
Her Tuition fees would be raised through crowd funding

Prime Minister Shri Narendra Modi launched his nationwide cleanliness campaign, the 'Swachh Bharat Mission' or 'Clean India Campaign' from the Valmiki Basti in New Delhi on Thursday, 2nd October,14 on the occasion of Mahatma Gandhi’s Birth Anniversary. Addressing the nation at the launch, Modi asked India's 1.30 billion people to join the 'Swachh Bharat Mission' and promote it to everyone.

JIMS students have been enthuastically participated in this programme on a regular basis in the campus and adjoining areas over the last 4 years. 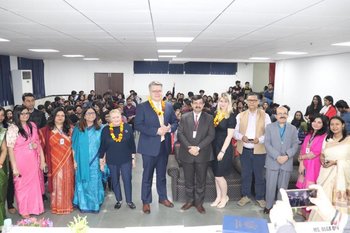 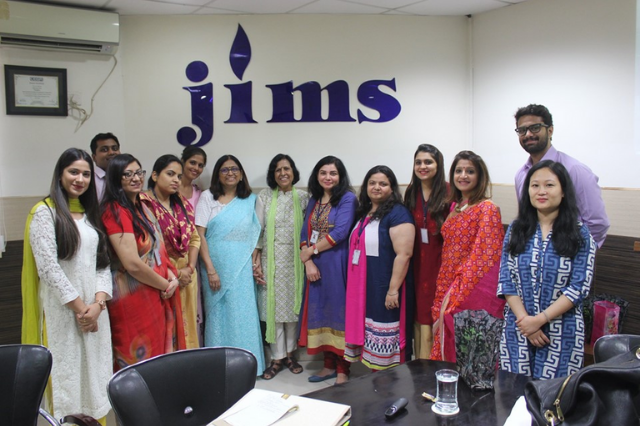